Treating your hearing loss early may help reduce your risk of dementia. 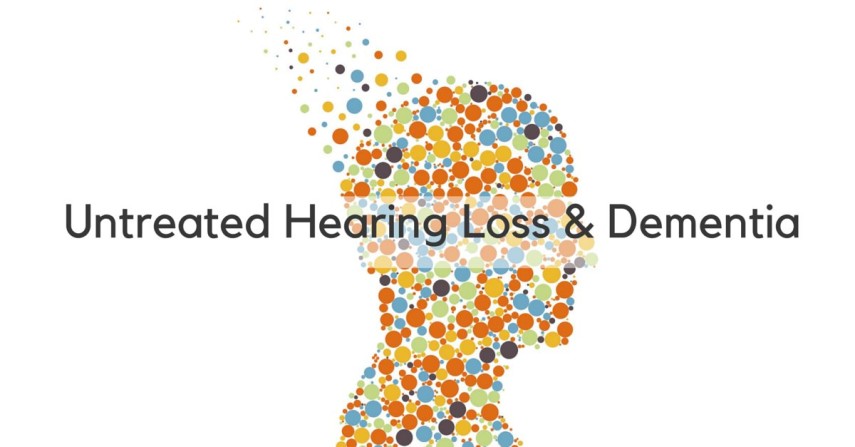 The Link Between Untreated Hearing Loss and Cognitive Decline

The sense of hearing is one of the main channels by which our brains take in information and allow us to interact with and respond to the world around us. When a sound wave enters our ears, it travels through the middle and inner ear and is transformed into an electric signal that is processed and catalogued in our brains. Songs that stick in our heads, the recognition of someone’s voice from across the room, an alarm to wake us up – these sounds are familiar because our brains remember them from multiple exposures.

In recent years, researchers have found potential links between untreated hearing loss and dementia. At Johns Hopkins, a study revealed that of 639 test subjects, those with untreated hearing loss were more likely to develop dementia over the course of 12-18 years. It is believed that the auditory system, which takes in and makes sense of sound waves from our environments, works in conjunction with different areas of our brain. Our brains stay in shape by registering sounds as reflexes, recognition, and emotional responses. With untreated hearing loss, these channels may begin to dull and certain areas of the brain are not as active as before.

Additionally, hearing loss has isolating affects if left untreated. According to the Hearing Loss Association of America, individuals who experience hearing loss report that the biggest challenge is making sense of verbal communication, especially in louder social settings. With hearing loss, people may be less likely to participate in cultural events, hobbies, and social meetings than before. Research on dementia has shown that people who are more social are less likely to develop dementia, due to consistent engagement with the world around them. These stimulations keep our brains active.

Often times, people who experience hearing loss are aware of the symptoms but are hesitant to seek professional treatment. On average, it takes about seven years from the time an individual experiences symptoms before they decide to get a hearing test and are treated for hearing loss. Unfortunately, this lengthy delay, especially for older Americans, could take a toll on their physical and emotional well-being, not to mention the risk it potentially contributes to developing dementia. According to Frank Lin from Johns Hopkins, hearing loss affects the brain in three major ways: cognitive load (which taxes brain functions when it struggles to hear), change in brain structure and function, and reduced social engagement.

However, the sooner hearing loss is treated, the less likely consequent problems might develop. In a 2011 study in Japan, 12 elderly test subjects with varying levels of hearing were given auditory and cognitive examinations over the course of three years. Researchers found that for the subjects who were experienced hearing loss and were prescribed hearing aids early on, the higher their cognitive abilities, compared to subjects who left their hearing loss untreated.

While the link between hearing loss and dementia is not conclusive, researchers have found that the early treatment of hearing loss shows improvement in brain function for older adults. If sounds have become muffled in your daily life, if you’ve found that conversations just aren’t as fruitful as they once were, and that you are consistently turning the volume up higher on your television, consider scheduling a hearing test and seeking treatment. Not only is this the first step to staying connected to the world, it is a major step toward keeping your brain active.