How our Brains and Ears are Connected

Dr. David DeKriek
Home
Blog
How our Brains and Ears are Connected 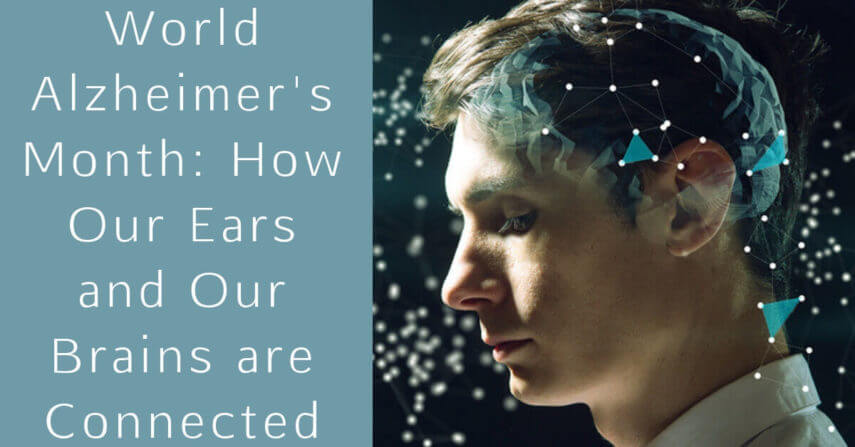 As audiologists, we are very interested in the ways brains and our ears/auditory systems are connected, how they communicate, and how they affect each other. This includes how hearing loss maybe linked to cognitive decline, and bringing awareness to this connection. In order to do this, it is important to first have a basic understanding of cognitive decline and what Alzheimer’s disease is.

A Basic Overview of Alzheimer’s Disease

Alzheimer’s disease is the most common form of dementia, accounting for about 60-80% of dementia cases. Dementia is not a disease in itself, rather a general term for a “decline in mental ability severe enough to interfere with daily life” (https://www.alz.org/alzheimers-dementia/what-is-dementia). Alzheimer’s disease is caused by a buildup of tangled bundles of protein and amyloid plaque that causes damage to the brain and interferes with its ability to communicate with itself and operate properly. Early signs of Alzheimer’s disease can be difficult to detect, however the disease progresses and becomes worse over time. In the beginning, people with Alzheimer’s will notice memory issues such as forgetting appointments or recently learned information. By the end, Alzheimer’s disease will rob a person of their ability to interact with the environment, care for themselves, hold conversations or recognize their loved ones. (https://www.alz.org/alzheimers-dementia/stages).

Alzheimer’s disease is very common, with a new person somewhere in the world developing the disease every three seconds. (https://www.worldalzmonth.org/get-involved/).

Our Ears and Our Brains: Healthy Hearing

Now that we have a basic understanding of Alzheimer’s disease and how it affects a healthy brain, we can now discuss how our ears rely on our brains for healthy and properly functioning hearing. In order to hear even the simplest sounds, a very complicated auditory function must occur.

It’s amazing to think that all of these steps occur to process every sound we hear, from the typing on a keyboard to every sound of every letter in every word.

Our Ears and Our Brains: Cognitive Decline and Alzheimer’s

Now that we understand how a healthy brain and a healthy auditory system work together in order to hear, we can now discuss how our ears (hearing loss) and our brains (cognitive decline) are connected. Especially in recent decades, many studies have confirmed a connection between hearing loss and the development of dementia such as Alzheimer’s disease. One of the most famous studies has found that those with mild hearing loss were twice as likely to develop dementia than non-hearing impaired peers, and those with severe loss were five times as likely to develop the disease (https://www.hopkinsmedicine.org/news/media/releases/hearing_loss_and_dementia_linked_in_study).

Scientists are still unsure of why this connection actually exists, however, two distinct theories have been developed. The first concludes that the two are connected because hearing loss often causes social isolation, and social isolation can cause dementia. The second theory states that when the brain is using all of its energy and resources to struggle to hear and understand, less resources are available to tend to other tasks like problem solving and memory.

This World Alzheimer’s Month, Get a Hearing Screen

If you have either noticed changes in your hearing or changes in your memory or cognitive ability, what better time than World Alzheimer’s Month to schedule a hearing screen with Dr. DeKriek of Fidelity Hearing Center. Because hearing and our brains are so closely connected, caring for one can help us to care for the other.