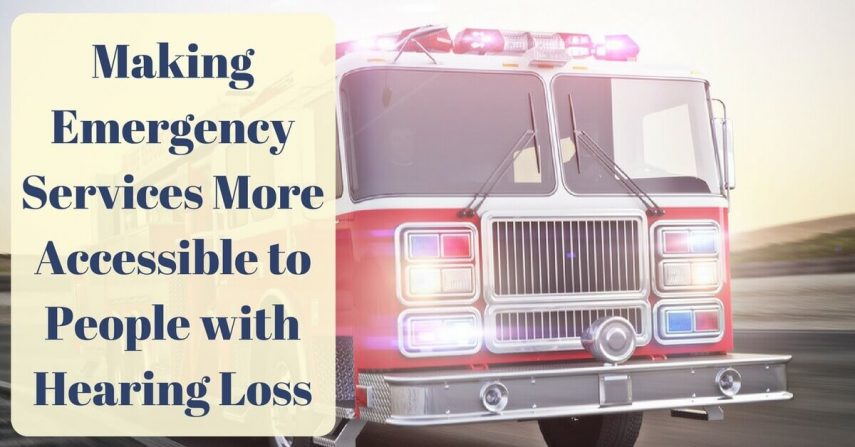 In March 2017, Mother Jones published an article on the tribulation of communicating with emergency services while hearing impaired or deaf. Maricopa County, AZ resident Julian Singleton had called 911 when his 83-year-old wife Bernice fell and was unconscious on the kitchen floor. Singleton, who had been deaf his entire life, had to call a video relay service (VRS) in order to communicate with 911.
VRS is an assistive program in which people with severe hearing impairment or deafness sign with an interpreter, who then communicates the emergency message to the 911 operator. As you can imagine, this process cuts into precious time when patients could be receiving medical attention and can be stressful in particularly pressing emergency situations.

Singleton found this out when he did not receive the immediate attention he needed (“he remembers the operator peppering him with questions”): “I can’t be answering these questions…so I gave up and hung up. I picked my wife up and took her to the hospital myself,” he said.

The 1990 Americans with Disabilities Act

The Americans with Disabilities Act (ADA) was passed in 1990. In this ground-breaking civil rights legislation, people with disabilities were guaranteed equal access to public spaces and services. The ADA is the reason people with hearing impairment can receive complimentary assistive listening devices at the theater and why there are elevators and bathrooms stalls for those with physical disabilities. The ADA also guarantees direct access to emergency services.

However, because the ADA was passed seventeen years ago, it has not been updated to incorporate major changes in technology that occurred in the 1990s. Of course, if you can think back to that time, cell phones were not regularly in use and sending a text was something from a futuristic sci-fi novel! To accommodate people who were hearing impaired, the ADA required that TTY (text telephone) technology was available for emergency services. TTY phones allow people to communicate by typing on keyboards connected to phone lines.

After Singleton’s harrowing experience with VRS and his wife’s emergency, he filed a lawsuit against the State of Arizona to sue localities charging that emergency services are out of compliance with the ADA by not providing equal access to 911.” According to Mother Jones, “In Arizona, two other residents and the National Association of the Deaf, a group that advocates on behalf of the deaf and hard of hearing, are suing the state, some cities, local governments, and government agencies…calling on the courts to require call centers to adopt text-to-911 technologies.”

Claude Stout, executive director of Telecommunications for the Deaf and the Hard of Hearing, explains that “the failure to update the regulations from the early 1990s have left the deaf and those who cannot communicate easily over the phone dependent on others to access emergency care.” Stout himself experienced difficult in this arena when he was experiencing symptoms of a heart attack in 2011 and had to rely on colleagues to take him to the hospital.

What’s the solution? Richard Ray, an expert on this issue who is currently working on improving accessibility and ADA compliance for Los Angeles, says that there is a simple solution: “Texting to 911 should have been set up yesterday. We’re not in a situation where we can wait any longer.”

Around the US, there are nearly 6,000 call centers with fewer than 1,000 that accept text messages. In order to ensure that all text-to-911 messages are received, the federal government would have to update and enforce this measure with the ADA. Another solution includes Next Generation 911, a digital service.

What to Do in the Meantime

Don’t wait until an emergency arises to figure out the emergency services available in your area. Check to see if there are assistive services now, and make sure these numbers are on speed dial. Most states offer captioned telephones as a complimentary service. Take the opportunity now to acquire one, if you need it.