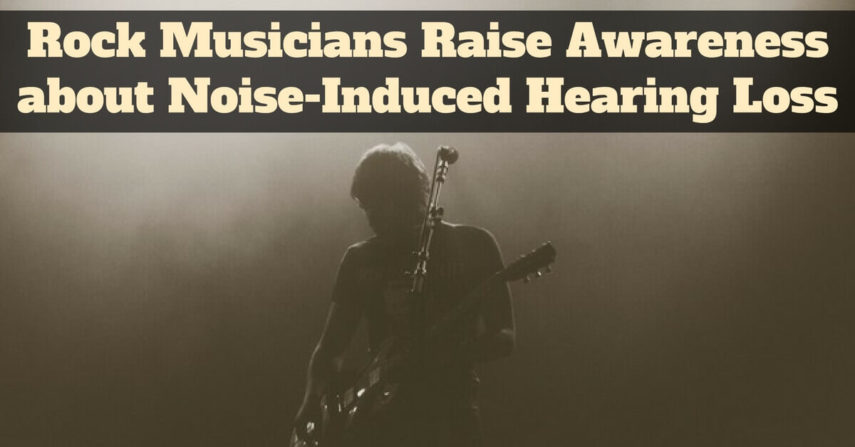 Iggy Pop of The Stooges, Peter Townshend of The Who and AC/DC’s Brian Johnson are all names synonymous with rock n’ roll – but they all have something else in common too. They have all spoken publicly about their experiences with hearing loss, and the effects that a lifetime of loud music has had on their ears.

By raising awareness, these rockers are warning other musicians about the dangers of headphones and the need to wear hearing protection when playing music.

Dangers of noise-induced hearing loss in the music industry

As one of the most common causes of hearing loss in the U.S., noise-induced hearing loss is something that can affect anyone – but musicians are particularly at risk.

Noise-induced hearing loss occurs through exposure to loud noises over an extended period of time, or a single instance of a very loud burst of noise (generally within the 110-140 decibel range).

Considering there is a risk of hearing loss with exposure to any noise above 85 decibels, the fact that the average gig will reach 110-115 decibels means that there are clearly some serious risks to foregoing hearing protection as a musician, or a music lover

To put things into context, 115 decibels surpasses the noise level of a pneumatic drill, which only comes in at 90 decibels. A construction worker would not dream of using this tool without hearing protection, yet musicians play in noisy venues all the time without using earplugs or other devices. It is also important to note that sound intensity doubles with every 3-decibel increase.

It is no wonder then that several key players in the rock and roll world have recently spoken out about their experiences with hearing loss, both to raise awareness and to warn future generations about the risks of failing to use hearing protection when playing or listening to music.

Peter Townshend: How one incident can have lasting impacts to your hearing

The Who’s Peter Townshend has spoken out about his experience with hearing loss. Pointing to several instrument-smashing incidents onstage in his career, he specifically recalls a television appearance in 1967 when The Who’s drummer filled his kit with explosives, but overestimated on the chemical agents, producing an incredibly loud bang at the climax of “My Generation”.

As noise-induced hearing loss can occur from just one single, loud burst of noise, it is definitely not beyond belief that this particular incident would have resulted in long-lasting effects.

In a recent interview with The Inquirer, Iggy Pop made several quips about his hearing loss, at one point exclaiming, “I am deaf as a stone!”

The interviewer mentioned that he was clearly experiencing hearing loss, asking to have questions repeated throughout the interview. At one point, he joked about “particle physics” when instead the interviewer was asking about legalization of marijuana in California!

Difficulty hearing conversation is not an abnormal side effect of decades of exposure to loud noise – but being able to joke about it is less commonplace. Iggy Pop’s humorous attitude towards his experience with hearing loss is a good example of one way to break down the perceived stigma around hearing loss.

It is especially important as studies indicate that being open about hearing loss will result in better responses from others. In particular, a recent study showed that disclosing hearing loss to someone while also giving them a method for accommodating that hearing loss results in the best reactions.

This could be as simple as, for example, “I’m hard of hearing on my left side. Can you please move over to my right?” By doing this, the study indicated that people will be more willing to provide support, and participants reported higher levels of positive reactions overall.

In May 2016, AC/DC’s Brian Johnson opened up to reporters about the reason behind his decision to stop touring with the band: he had found out that, if he continued, he would be at serious risk of total hearing loss. He pointed to the dangers of noise-induced hearing loss in the professional music industry, stating, “onstage you don’t have any defense… [against] that industrial noise. You’re in a rock and roll band. What the heck do you expect?” (The full interview is available here).

On the one hand, the pressures of portraying a certain image and lifestyle onstage certainly come with the job of being a rock and roll legend, but it is clear that failing to take steps to protect one’s hearing can have detrimental impacts, especially later in life.

Thankfully, things are looking up for Brian Johnson, who recently reported a positive outlook to Rolling Stone based on his trial of new, still-developing in-ear technology. Johnson believes that this technology may be the key to getting him back on stage.

As for products currently on the market, there are a huge variety of options available to musicians, both in terms of custom ear protection and customized functions within hearing aids themselves.

If you are a musician, you may be interested to know that earplugs can be custom-made to fit your ears, and your style. High-end earplugs focus on making sound clear and natural rather than muffled, and they can even come in different colors if you want them to blend in.

‍
If you think you may be experiencing hearing loss, it is also important to ensure that you are aware of the extent of that hearing loss, so you can know how to best prevent it from worsening. In addition, several hearing devices currently on the market provide specialized features that cater to musicians.