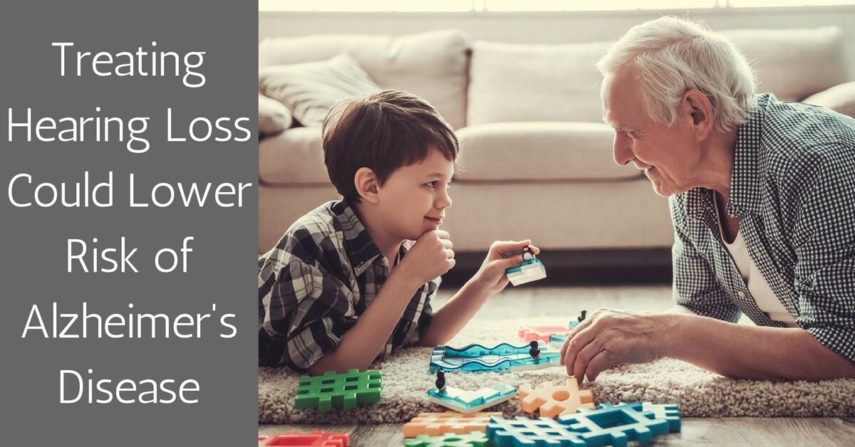 November is an important month, and not just because of Thanksgiving and Election Day. It is also National Alzheimer’s Awareness Month, designated as such in 1983, with the aim of raising awareness about a devastating disease that has personally touched 1 in 2 American families.

While some of the risk factors for developing Alzheimer’s can’t be changed–age, family history, genetics–scientists have established other factors which can influence one’s chances of developing Alzheimer’s or other forms of dementia. Perhaps not surprisingly, these secondary risk factors are all tied to the overall general health of a person’s body.

Staying active, both socially and physically, has a fortifying effect on the brain, as does a good, heart-healthy diet. And as scientists have uncovered more about the connection between untreated hearing loss and dementia, they have added another item to the list: treating hearing loss with hearing aids.

Hearing plays an important role in the health of the brain, and scientists are just beginning to understand how hearing health and cognitive health are connected. One they they do know for certain is that when serious hearing loss goes untreated, the result is an increased risk of cognitive decline and dementia. Fortunately, taking steps to treat hearing loss has been proven to help to reduce the chances of developing Alzheimer’s and other forms of dementia.

Studies back up correlation between hearing and brain health

Frank Lin, an otologist and epidemiologist at Johns Hopkins University in Baltimore, has been researching the link between hearing loss and dementia since for many years. He and his team set out to establish whether or not untreated hearing loss leads to diminished cognitive function.

In 2011, he and his team tracked the cognitive health of 639 participants who were mentally sharp at the outset. The researchers tested the participants mental abilities regularly, most for about 12 years and some for 18 years. A strong correlation was found between the severity of each person’s initial hearing loss and their risk of diminished cognitive function. Even those with only moderate hearing loss had a three-times greater chance of developing dementia.

Why treat your hearing loss?

The benefits of hearing aids have been widely researched and are well-known: improved relationships, increased confidence in social situations and the workplace, and better general health and safety are just a few. But did you know that treating hearing loss also helps to actively defend the mind from dementia and Alzheimer’s disease?

Although it has not been established exactly how hearing loss leads to dementia, researchers know for a fact that treating hearing loss aggressively can help to combat this terrible condition. In a comprehensive French study, it was proven that hearing aids can actually lower the risk of cognitive decline in a substantial way. In fact, researchers found that those with hearing loss who wore hearing aids had about the same chance of developing dementia as those with normal hearing. The study, led by Isabelle Mosnier of Assistance Publique-Hopitaux in Paris, examined 94 people between the ages of 65 and 85 with profound deafness in at least one ear. Each participant with hearing loss was given a cochlear implant and also received twice-weekly auditory therapy. The results speak for themselves: more than 80 percent of those who had the lowest cognitive scores showed significant improvement one year after receiving the implant.

How to get started

With today’s hearing aid technology, finding an effective treatment strategy for your hearing loss is easier than ever. The first step is a simple, painless hearing exam. After that our expert team at Fidelity Hearing Center will work with you to find the hearing aids that are the best match for your hearing loss and lifestyle. If you have been living with untreated hearing loss, take the first step and schedule your hearing appointment today–it’s one of the most important ways to ensure your happiness and health, now and in the years to come.