Why Are Restaurants So Loud?

Dr. David DeKriek
Home
Blog
Why Are Restaurants So Loud? 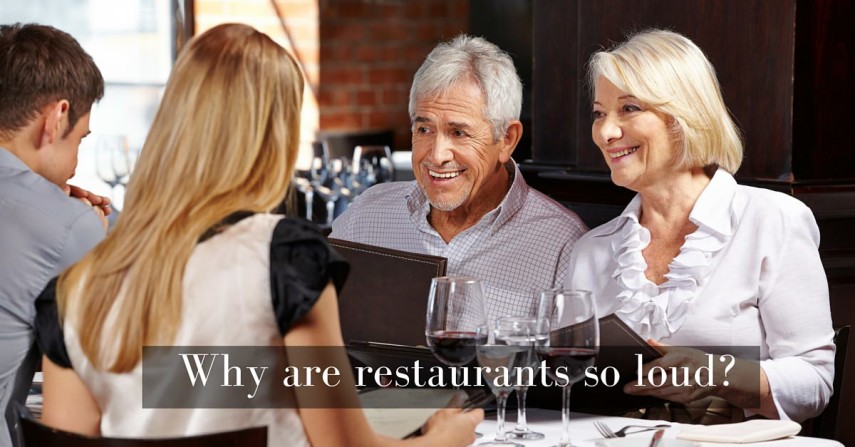 Is it just me, or are restaurants getting louder… and louder?

If you felt like you were practically shouting at your dinner companion last night while determining whether to get dessert, you might not be so far off. In recent years, a number of food critics, restaurant reviewers, and business journals have noted the rise in decibels at popular new restaurants. Considering the commonalities of these trendy places, it becomes clear why restaurants are just so darn loud these days.

First, the design. Most new restaurants pop up in up-and-coming neighborhoods, and occupy spaces that were former warehouses, factories, or the like. The Wall Street Journal reports on Chicago’s fine-dining spot L20, which hired architect Dirk Denison to design the interior. Denison says the space was “a big square box – the worst scenario. Parallel walls cause noise to ping back and forth.” Most restauranteurs do not think of hiring an acoustics expert to survey a spot before moving forward.

Additionally, the modern, clean aesthetic of a restaurant includes exposed brick, wood, iron, and concrete, foregoing the carpet and linens of fine-dining restaurants past. These accoutrements functioned to muffle noise, and without them, restaurants are much louder. Open kitchen designs are also popular, thus adding the clatter of pots and pans and the chatter of chefs and kitchen staff to the mix.

Next, the vibe of the place. New York Magazine’s Grubstreet reports, “Most restaurant scholars will tell you that the Great Noise Boom began in the late nineties, when Mario Batali had the genius idea of taking the kind of music he and his kitchen-slave compatriots listened to while rolling their pastas and stirring their offal-rich ragus and blasting it over the heads of the startled patrons in the staid dining room at Babbo…Sound systems were cranked up and suddenly noise became the hallmark of a successful New York restaurant.” Similarly, Bon Appetit notes that loud restaurants “are perceived as lively and vibrant. Very few people want to socialize in a silent room.”

However, louder the music, the louder patrons will have to talk to hear each other over the music, adding decibels to the volume in a restaurant. When restaurants get too noisy, this could take a toll on business. In the WSJ, the owner of a Los Angeles restaurant recalls, “I had friends who didn’t want to come back because it was so loud.” He hired a company to install acoustical panels. Likewise, the Chicago Tribune reports on a number of restauranteurs who have installed discreetly designed panels on their ceilings or walls, after complaints from patrons. This seems to be a new trend for new restaurants with modern design.

For people who are hard of hearing, don’t lose your appetite quite yet. You can still enjoy the best new culinary trends in these restaurants with the help of remarkable hearing aid technologies. Hearing aids are equipped with filters to help you better focus on speech. Directional microphones will amplify specifically their voices and help you to understand the conversation with greater ease. Certain hearing aids with iPhone compatibility use the iPhone’s microphone to wirelessly stream the voice of your companion into your hearing aids, greatly mining background noise. Check in with us at Fidelity Hearing for program modifications that will enhance your experience in a noisy restaurant, and be sure to save room for dessert!